This is a skateboard deck. I'm going to paint something on it. I have no idea what, though! 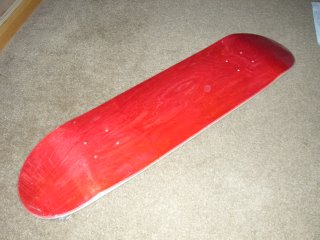 My friends Christian and Danielle have an art gallery in the Valley, and Christian has asked me to do a piece on the skateboard for a show coming up in March with the theme "Self-Propelled." Right off the bat the only ideas that occur to me are some kind of pretty girl with wings or rocket engines or something like that, or possibly paint several dozen hamsters, belly view, on the bottom so it looks like they are propelling the board with their little feet.

I think I should brainstorm a bit more, huh?

I need to go to the hardware store and get some steel wool and sandpaper and a few other things to prep the board and put on finish when I'm done. I'm gonna lay down primer, then a base coat, and then paint on the base with acrylics, maybe a bit of airbrush, then seal that, then put a hard polished polyurethane finish over that. Should look pretty nice, as long as I come up with something cool to paint.

Some nice words from friends about the comic. This week's will be up on time. I haven't written next week's yet, so I better get to it!

In hindsight, I should probably have done an actual comic of R. and J. telling me that I should do the comic as the first strip, so that I didn't have to explain all that, eh? Well, I'll do that one later as a "#0" strip, like all those fancy Image comics from the '90s. Many of which are collecting dust in my closet. No no, I bagged and boarded them, and they're in short boxes! The boxes are collecting dust, not the comics! Sheesh!
Posted by Jeff Z at 4:23 PM