Here are a pair of sketch cards that I just completed for Mike in North Carolina: 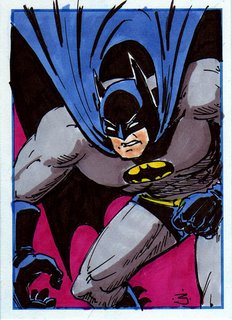 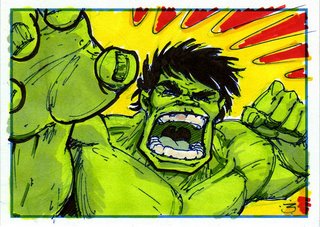 I really like how these came out. I used my Japanese Pilot pens, a Pitt brush pen and Prismacolor markers to finish them. I have not really drawn either Batman or the Hulk prior to this, although I think in some ancient sketchbooks I did when I was about 8 there are a few Batman drawings.

I've actually gotten a bit of attention for the sketch cards I did for InkWorks, which has gotten me some small side commissions like this one. I should probably do like my friend Tone Rodriguez (who got me into the sketch card game) and get some custom-printed personal sketch cards to draw on. Hopefully I'll be able to do some live at San Diego Con, too. If you like sketch cards, I'm happy to do commissions!
Posted by Jeff Z at 3:07 PM No comments:

Bet you thought I'd miss it again

But I didn't! New comic is up.

What's new in art for me, hmmm... struggling with yet another new pitch here at work, for a venerable game franchise. The characters have to be just so, and it's very difficult to do them that way. We have more time than the last pitches but it's taking me forever to get them done, which means I'll probably be crunching again next week. Ah well.

I'm feeling some frustration with my artness last couple of weeks. I'm running up against some walls of technique and art approach which are bothering me, and as usual the path to overcome them is pretty murky. I need to make time to study some new stuff again and to do things that are outside my comfort zone. Not easy to do with everything that's going on around me.

I should scan in some more sketches for you, eh?
Posted by Jeff Z at 10:16 AM No comments:

New comic is up! Yay for punctuality!

Back to the Comics

New comic is up! Sorry I missed last week.
Posted by Jeff Z at 10:54 AM No comments:

As I posted previously, I had a project to paint a skateboard deck for a themed gallery show that starts this weekend. Well, I finished it! Here's some progress shots: 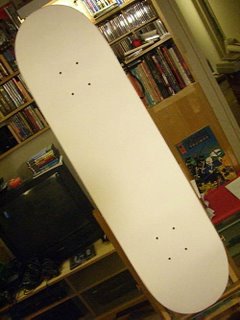 Before putting any paint on I sanded the red finish that was on the board and then applied white spray primer, just plain ol' Krylon in the rattle can. 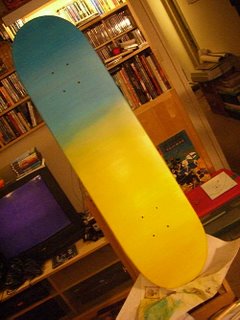 This is the background gradient. It's upside-down in this picture. I did the artwork using acrylic paints and brushes. This gradient didn't come out as well as I would have liked, but it looks okay. 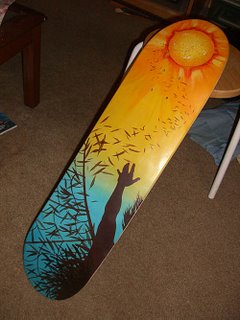 Here's the finished board. I call it "Icarus Falls." The theme of the show is "Self-Propelled," and I think that the Icarus myth is one of the earliest (and obviously longest lasting) stories about self-powered flight, so it seemed appropriate.

For the sun at the top, I used actual astronomical photos for reference... I didn't just want a bright yellow ball, that's boring. There's a trail of feathers spiraling down from the sun to the figure, from the rapidly disintegrating wing.

Acrylic paint goes on pretty thick, so the sun and the figure had quite a bit of bumpy texture to them, which I didn't want the final board to have. Also, since it's a skateboard deck and it's possible that someone might actually put some trucks on it and use it, I wanted to put on a tough overcoat finish. I used polyurethane, again from a spray can. I put on about 12 coats, pretty much the entire can, sanding and steel-wooling between each coat. As the thickness built up I sanded down the high spots, so the final finish is perfectly smooth. I wanted to get it buffed to a very glossy mirror-slick finish like lacquer, but apparently the spray polyurethane won't do that, at least not with the buffer that I have. So it's a bit more matte than I wanted, but it's still a good finish and quite attractive and tough.

Well so that was fun. It goes on display this Saturday night, I will be at the opening party in the evening, so if you're in the Valley area come say hello! It's always a good party at this gallery and many of the artists will be there.

Meanwhile, there will be a comic this week, as work has calmed back down. I got the pencil, lettering and borders done last night and will ink it tonight. The past weekend turned out to be too full to do a comic, so I apologize for missing a week. It will happen from time to time as long as I'm going week-to-week; I hope to get a bit further ahead over the next couple months.

Careful what you ask for

No comic today because I've been at work until 10pm last two nights and will be again tonight. Major crunching, as we're doing art for FOUR separate new game pitches. I'm having a blast but it's taking a lot out of me, I'm pretty much cranking non-stop for 12 hours straight at the drawing board and computer.

However, a dream of mine has come true: I am now making a living drawing spaceships. Lots and lots of spaceships. Now that is something to be very thankful for, yes indeed.