I put the comic up earlier today, so my obligation for this week is discharged.

No painting today, but here's a little thing I'm doing in Sketchup, which now has a free version for download - it's really awesome. 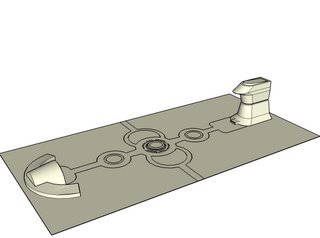 If you remember that imaginary city I was painting yesterday, this is the beginning of a 3D model of the central plaza where the government buildings are located. The middle of it is three large circular fountains, with roads or walking paths connecting the two ends of the plaza. Most of it would be parkland with trees etc. As I build more of it I'll post progress shots.

Most likely I won't bother texturing it, instead I'll use different views of it to paint over and make realistic images of it.
Posted by Jeff Z at 4:07 PM