HBO now has a "Buzz" piece about our game, a short video which you can see here! How awesome is that? I'm not in it, but my boss Damon is, and there's a lot of my artwork shown, which gives me a nice warm fuzzy feeling. :)

Back to the Con caricatures; I had my digital camera with me and it dawned on me that I oughta take some pix of my vict- uh, I mean customers, with their caricatures! I won't show the customers (I would need permission), but here's shots of their artwork:

This girl looked exactly like this! Really! She was easy to draw. 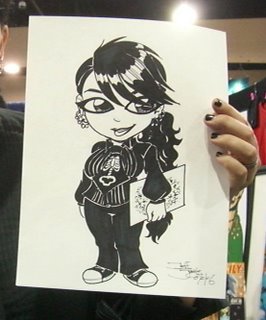 Patricia here, she is EEEVIL! 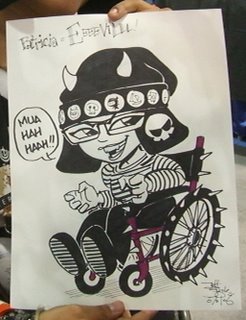 These girls were a bit too "normal" so I gothed 'em out a bit. 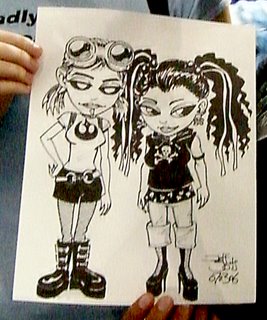 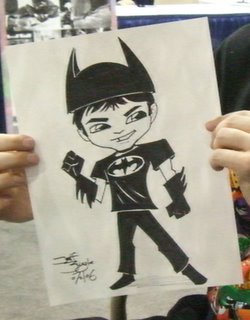 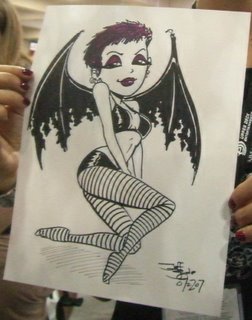 Turning people in t-shirts and jeans into stylish goths is fun! 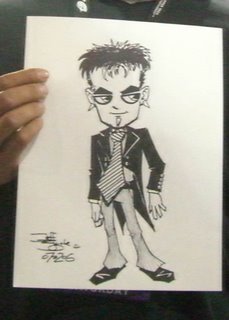 This guy's girlfriend will now see him as a Mighty Warrior! 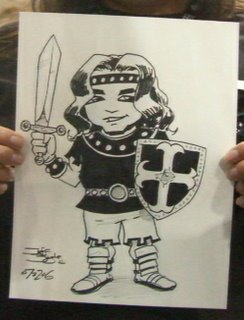 This girl said that this caricature was her favorite thing that she bought at Con. :) 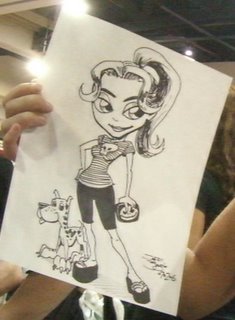 Another sexy faerie for hubby: 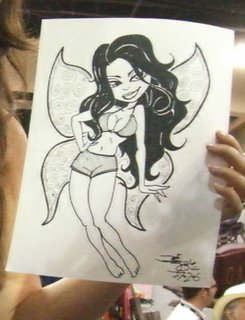 And two perfectly normal people who allowed me to spice things up a bit! :) 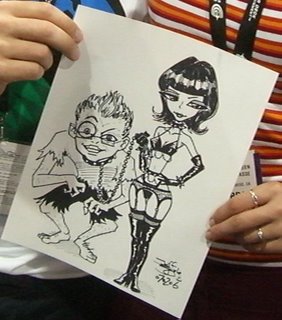 There were more, but not all the photos came out well enough to see the caricatures. Oh well. Thanks again everyone! :)

I didn't buy much at Con, just some art books and sketchbooks. I didn't get much swag either, but I must say my favorite acquisition was an awesome hand-knit Pixel Skull iPod Cover that the mighty R. Stevens gave me. He is a hell of a guy and one of the web's best cartoonists, and one of the cattle prods behind me doing Just A Bit Off.... If you don't read him daily, you're wrong, and if you don't get it, you are taking life too seriously and you should see a doctor for relaxation therapy. Thanks, R.!

The new comic is up today because tomorrow I'll be in San Diego without Internet access - actually, I probably could have access, but I really just don't want it for the next 4 days. I will be at the Bloodfire Comics booth #1623 if any of you, my tiny cadre of faithful readers, will be at the Con, so come around and find me there. I will be doing caricatures and selling the new "ashcan" printed version of the entirety of "Just A Bit Off..." so far, as well as a limited number of my "Goths, Girls and Gadgets" sketchbook.

My rough schedule for being in the booth is as follows:

Why not in so much on Saturday and Sunday? Well, over the last few years as the "fan demographics" of the Con have shifted from comics fans over to TV and movie fans, Saturday and Sunday, which used to be the best days for indie publishers with lots of people coming around to the booths, are now frankly lousy days. People just don't stop at the booths much, it seems. The best sales day we've had since 2002 has been, weirdly, Thursday. I guess the real comics fans who actually like to buy new comics from small pubs come early, while the more "casual" fans who only come to see Sarah Michelle Gellar, Kevin Smith or Joss Whedon show up on Saturday and really don't bother coming around to look at comics, because they don't care. So there doesn't seem to be much point in working so hard on Sat and Sun.

Of course, if things are different and there's a mob at the booth all weekend, I'll stay around. :)

OK well I'm still at work and have to do 12 hours again today. Next week is the "final push" for the beta, and it's gonna be rough. I'll make it though. I'm getting solid sleep even with the long hours. See you on Monday!
Posted by Jeff Z at 9:54 AM No comments:

I put the comic up early yesterday, because I finished it at work and then didn't remember it was Tuesday instead of Wednesday. *sigh* I probably didn't know what day it was because I'm short about 5 hours of sleep since the weekend, what with doing 12-hour days at work again for the Sopranos game crunch, and then doing Wumpskate on Monday, and then not being able to get to sleep last night until sometime after 12:30, then trying to get up to do exercise at 6:15... whoof. I'm beat.

The comic will go up early next week too because I'll be at Comic Con on Thursday, going down to SD on Wednesday night, so I'll put it up on Wednesday. Fortunately I got next week's comic done last weekend, so at least I don't have to worry about drawing it. I really need to try to get a few comics ahead somehow, but since we're on 12s the rest of the month and next weekend is all Comic Con, I can't even think about attempting that until August at least. So I'll just have to muddle through.

Happily, I've found a cool free webcomic management scripting system which I'm going to get working after the Con. This will allow automatic updating and some other great features like Search and an actual archive calendar page. I won't have to do everything by hand anymore, which will save a bit of time.

Not so happily, I'm feeling grumbly and unsatisfied with my work, all of my artwork lately. I just don't feel like I'm progressing, in fact in some ways I'm RE-gressing, and I don't like that at all. I have to find a way to get some focus back on my art. I've had too much going on and it's taking too much of my energy, or at least diverting too much from my art. How I'm gonna manage that, I have no idea at the moment.
Posted by Jeff Z at 8:21 PM No comments: