A couple new ones

I tried to upload these before I left, but Blogger wasn't working:

This is a piece I did for the upcoming Tikis and Terrors "Pirates of the Scare-ibbean" coloring book. I call it "The Accomplice." 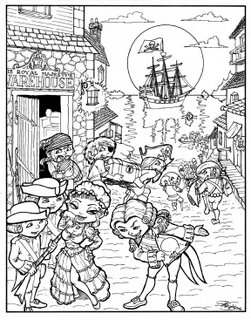 This one is a drawing I had penciled, which a guy at Bats Day decided he wanted and bought. I inked it for him and sent it off. The Girlfriend thinks that I'm a frustrated fashion designer because of this very complicated outfit. :) 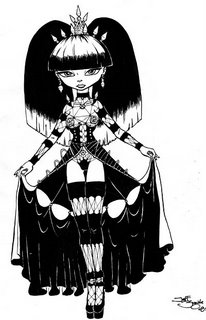 Score One for the Web Geeks!

By golly, That R. Stevens guy, who is already one of my super-heroes, has now completely exceeded that and become, yea verily, a demi-deity, as he has somehow managed to achieve that lofty and elusive goal of becoming a comic syndicated in actual newspapers. Glory be!

That rocks. I hope it makes you happy and also wealthy, R.!

Meanwhile, I finished up some leftover art from Bats Day and have one more piece to ink for a scary pirate coloring book this month. I will post the scans later as they are at my home.

At work I am drawing lots of fun droids and other evil hardware toys. Of course I can't tell you for what yet, but I guess it won't be much of a surprise when I actually do tell you.

In other weird news... Today is the 40th anniversary of Star Trek (the original series) going on the air, it started September 8, 1966. And now, they're re-releasing Original Star Trek into syndication with all-new effects shots, a la Mr. Lucas's re-workings of the first Star Wars trilogy. So, what you're gonna get is the live-action stuff will be roughly the same, with probably cooler phasers and transporter effects and better stuff on the bridge screens, but all the space shots, planet orbit shots, shooting at Romulans etc. will be all totally redone in CGI.

Knowing me, one would think that I'd be opposed to this, or at least have mixed feelings... but I'm cool with it, because I already own the entire original series on DVD - and not that new-fangled three multi-disc sets, the older 2-episodes-per-DVD, uncut, remastered exactly-as-originally aired set (here's one)! So, I'm like hey, whatever. It will be the same stories, with just modern FX shots - and no "Han Shot First" re-editing crap. I'm sure they'll be editing a bit for time, since modern TV has more commercials, but they did that for the original syndication anyway. The point is, I've got the whole thing in "pristine" condition, so I'm cool with the new version. I'm sure it will be out on DVD within 6 months, and I'm sure I'll buy it, too.

Speaking of pristine condition, the new reissued "original print" Star Wars DVDs come out on Tuesday. You bet I'll be getting them too... because HAN SHOT FIRST, DAMMIT! It's about farkin' time they put these out. And, yay bonus, Lego Star Wars II is coming out the same day... and that there is gonna be SO fun, as was (and still is) Lego Star Wars I. I'm still playing it (when I can, rarely...). I need only about 100,000 more coins to buy the "Invincibility" cheat, so I can actually beat the whole damn game and build all the models, woo!

OK back to work. What with all the vacations everyone's taking, we're shorthanded again this week and I'm up to my ears in droid drawings.
Posted by Jeff Z at 10:42 AM No comments: