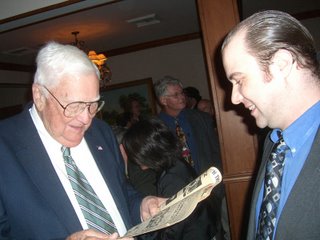 Yep, I'm gettin' fat. Yep, I'm gettin' a bit bald. But by golly, I got to meet Jack Davis on Saturday night at the CAPS Banquet, so I don't really care whether my head is shiny. Jack is really, really nice and friendly and happy, and graciously accepted all the praise and honor we gave to him. I'm still pretty wonked out about meeting him. Pretty mind-blowing... see, he's looking at one of my favorite bits of his, "World's Most Obnoxious Sports Fan" from this December 1975 issue: 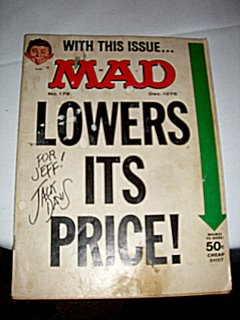 Which has seen better days, but is now autographed. So now I have a nice memento of meeting one of my favorite (and one of the best) cartoonists ever. I got to tell Jack that I had gone to my first baseball game earlier that year (Mets vs. Dodgers at Shea) and this piece made me almost pass out with laughter, because I swear that guy (the Obnoxious Sports Fan) was sitting right behind us (or was it next to us?) - I thought maybe Jack had sat next to the same guy at some point, and based it on him.

Jack is so cool that not only did we cartoonists honor him, but at the banquet he received letters of recognition from former Presidents of the United States Jimmy Carter and Gerald Ford, both of whom he caricatured in the 1970s. Now that there is some major respect, when you can cartoon (sometimes unflatteringly) the Leaders of the Free World and they send you love and praise. Whoof!

Also, Paul Coker Jr., another most excellent Mad cartoonist, was there for the party. I didn't get a chance to talk to him, sadly. There were a lot of people there, I was lucky just to get up to say hi to Jack. Ah well...

I hope I get to meet Mort Drucker too, that would be the Mad Magazine Trifecta, which of course includes this guy here: 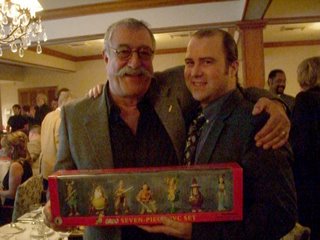 I got really lucky and won this door prize, a 7-piece PVC figurine set of Sergio Aragonés "Groo" characters, which Sergio was kind enough to not only sign, but draw Groo and his dog Rufferto on the box. The Girlfriend (who took these pix) won a comic book of Sergio's from 1977, published by DC, and he also signed and sketched on that. Sergio is her #1 favorite cartoonist ever, with Paul Coker Jr. following at #2. Needless to say we were both very happy with our luck! We figure that if we ever have grandkids, this piece might net them enough on eBay after we're gone (no way I'd ever sell it while I'm alive!!) to put them through college.

Regular readers know I see Sergio about every month at our CAPS meetings, so this isn't such a mind-blowing event for me, but... well, yeah, it is. Sergio is on my top 10 list of not only finest cartoonists ever, but finest human beings ever, since I've gotten to get to know him. He is just a truly impressive person, who is still just as wide-eyed and excited about his gifts and his drawing and his life as a 6-year old boy - but of course he is also a man, who has traveled the world and experienced life in all its splendor and horror, and come through shining. Everyone I know who knows him loves him, and he is unfailingly positive and wonderful to everyone to whom he speaks. If you asked me right now, "who would you most like to emulate in life," the answer, without hesitation, is Sergio Aragonés.

Just to show that I've actually been drawing from time to time, here's a sketch I did at the CAPS meeting last week, a little city plaza perspective that just sort of flowed off my pen during the presentation by the Hellboy Animated guys. I might just set up a more rigorous perspective (it's not very accurate here) and attempt to paint this one... 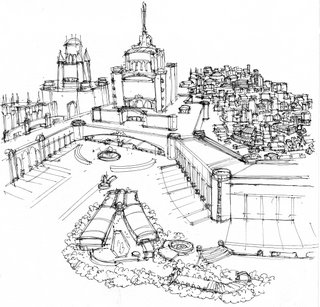 And finally, I've joined the CGSociety CG Challenge 20, where I'll be competing with hundreds of other concept and CG artists for some nice prizes. Considering some of the incredible artists who are participating, I doubt I'll win anything, but it will be good experience and a little exposure in my field, so it will be fun. I have to post progress images as part of the contest, so I'll put them up here as well.
Posted by Jeff Z at 4:25 PM