Here's what I'm working on now for my portfolio:

This is an expansion on a project piece I did that served its purpose at the time, but didn't really come out as well as I liked. I talked to several of my colleagues about it and got suggestions, and this is where I'm going with it.

There are both painted and lifted-from-photograph elements; I'm trying to blend the two so that it's hard to tell what's what. The photograph parts are the sky, some of the foliage, and much of the stonework, some of which is from pix of actual Mayan temples.

Below, here's the original "finished" version from which I started. It's not horrible or anything, but it's just not that exciting an image. 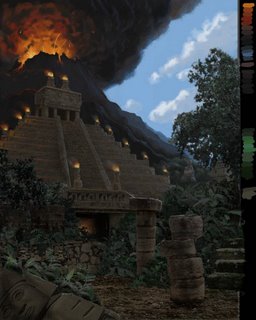 You can see that I'm going for a lot more contrast and drama in the expanded version. The idea is that most of the left foreground will be more lit with the red light from the volcano. Also, I'll be adding some kind of exploration party checking things out, carrying torches that will add more red local lights, with the blue sky and sunset clouds giving the cool offset. We'll see how it works!

I've been doing a bunch of caricatures and other weird stuff, I'll try to get some up soon.
Posted by Jeff Z at 11:03 AM

Hope you don't mind but I really liked your Painty Paint Painting that I borrowed it to be the wallpaper of my laptop! I wish I had an once of artistic talent like you have Jeff. Keep up the great work on the comic btw ^_^

Great job. keep it up!

wow thats amazing! i wish i could paint and draw like that, i draw, but thins like people and pian and stuff that nobody likes to think about.... iwish i had your tanelts...wow :) keep up the good work