Inspiration from a Master

I've really been diggin' on Ryan Church lately. Here's a vehicle sketch I did that was spurred by diggin' his stuff: 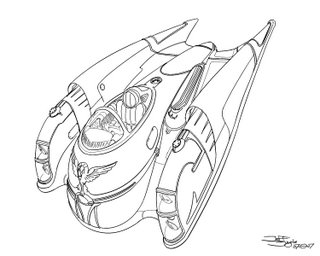 He's a really nice guy, I got to talk with him for a while at Comic Con, and he's one of the top concept guys out there. He's got great techniques and I've been working with them, applying them to my own stuff. He likes doing flying stuff and spaceships, so we're kindred spirits there.

I also did this one while watching his instructional DVD for Painter, just trying to imitate what he was doing right along at the same time, grok the techniques he was using and try to keep up with his work speed.

He's just got a really cool, loose-ish way of painting, which gives really great results. And that's why he gets to work on Star Wars... :)
Posted by Jeff Z at 1:33 PM No comments: