Yep, more sketches. I have a lot more than these but I can't really put them all online. Most of them are pretty boring exercises in construction or light and shade (or both), kinda like this one:

Doing a lot of airplanes, because I've been watching the Scott Robertson DVD on aircraft. Mine are not so fanciful as his. However, airplanes are excellent practice for drawing 3D forms with accurate perspective. 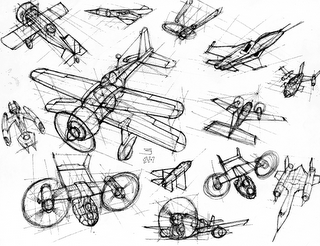 Pulled one of these planes out and cleaned it up on tracing paper: 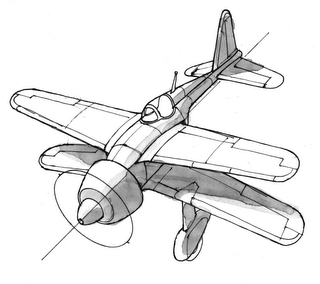 I traced this plane off a very messy scribbly sheet of sketching, I liked the shape: 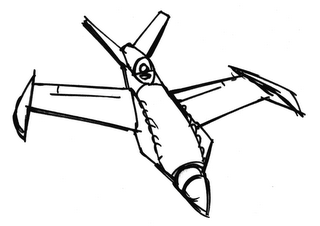 So I went ahead and did a more elaborate drawing, which turned out with parts that aren't right: 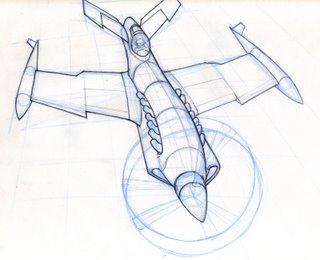 Somewhere during this drawing, I came up with a sort of story idea where this plane is going to try to be the first prop-driven aircraft to break the sound barrier in level flight. Actually I think that may be physically impossible (though it was apparently done a few times in steep crash dives during WWII), but it's a fun sort of romantic extension to the old prop-plane/barnstormer sort of tradition. So this is a plane that's got a really huge powerful engine with two counter-rotating props to partially offset the massive engine torque, and some fancy swept-serrated wings like a jet fighter, with control surfaces that are more like modern supersonic fighters - the older control surface systems don't work well up around and beyond 1.0 Mach because the physical airflow forces are much different from subsonic flight. But I digress...

Anyway, I could see that the drawing was off, so I laid out a more formal perspective grid and got it more accurate: 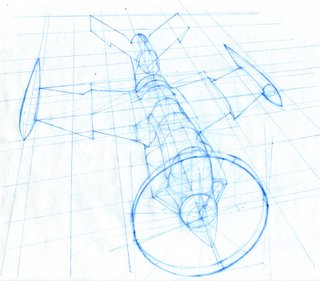 I guess it's hard to see since this isn't a completed line drawing, but the wing on the right was too long in the first drawing, and some of the details at the front weren't in proper perspective. I tried to correct all that. I spend a lot of time trying to get the prop ellipses right drawing by hand; I don't have ellipse guides that big (this sketch fills a sheet of 9x12 marker paper) so I'm gonna have to check them in Illustrator or something.

Eventually I wound up with this side view, which I rendered quickly with marker:

I'm still gonna go back and work the previous sketch, most likely doing a layout in Illustrator and then ink drawing in Painter. Might go on to do a full photo-real rendering too.

I was also watching my Syd Mead DVDs again, and among other little drawing notes, I made a couple of "master copies" of the "Sport Hypervan in the DuPierre Equine Courtyard" image value comps: 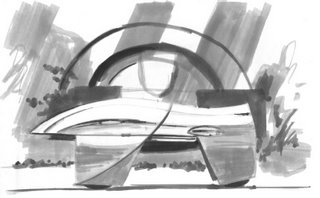 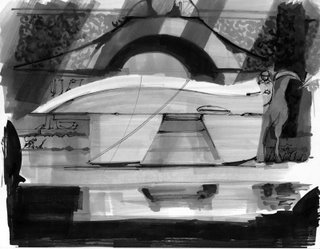 The Hypervan isn't really drawn in the right proportions, but these were still fun, quick and good exercises. Someday I'll have that kind of layout and design sense...
Posted by Jeff Z at 3:48 PM