I've done a set of sketch cards (see below) for a charity auction benefiting the American Cancer Society. The auction will be held online on eBay on March 8th, 2008. Here's a great opportunity to have a piece of my original art (or art from any of over 100 other excellent artists) and help out in the fight against cancer at the same time.

This past year my mom, a good friend, and that friend's mom have all been diagnosed and treated for cancer. All of them are just fine, thanks to the cancer research that the ACS supports, so it's certainly a worthy cause! I hope you'll give it a shot.

I'll send out a reminder to everyone on my email list just before the auction. If you're not already on my list, send me an email at listlackey@jeffzugale.com and I'll add you. You can also sign up for an email notification on the event page that I linked to above.

I'm really happy with how the cards came out, they're very different from any I've done before: 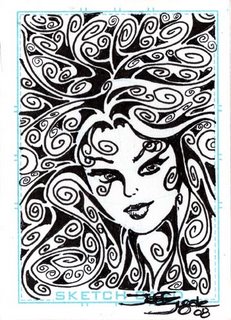 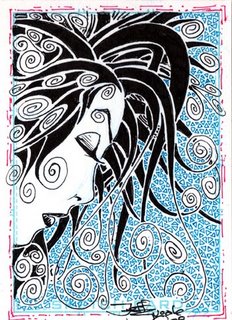 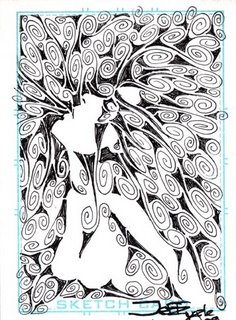 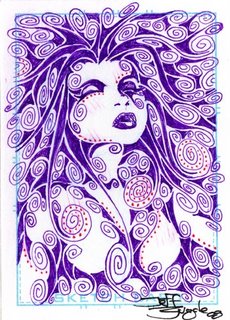 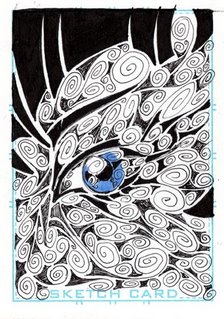 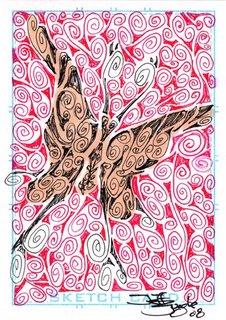 Email ThisBlogThis!Share to TwitterShare to FacebookShare to Pinterest
Labels: sketchcards

This should be inspiring...

This guy's work is absolutely stunning. I look at this stuff and I should be inspired to go draw and paint stuff, right? But since I'm kind of on a down cycle about my art right now, it just makes me wonder if I'll ever find my artistic voice. Or if I even have one.

There's an... well, an "IT" in a lot of other people's work that I don't see in my own. I don't know what "IT" is. "IT" is probably a combination of things, because I see "IT" in all different kinds of work, from ethereal fantasy stuff like James Jean's to even some of the most prosaic concept art for games. There's something about a lot of stuff that says "REAL ARTIST" to me, and then I look at my stuff and I don't see that showing.

I like drawing the stuff I do, but it's starting to feel empty to me. I need to try to find something in my art that makes me feel the way I did when I was playing guitar and singing in bands. Back then I didn't feel like I had no creative outlet, I didn't feel "stuck" or stagnant; I was always making progress, writing songs and recording them, playing gigs... actually feeling myself learning something or getting better at it, hearing my music in fairly finished recorded form, and getting feedback both from other musicians I played with and from audiences.

Doing visual art is much further removed from that kind of energy transfer. Spending 20 hours on a painting feels nothing like spending 20 hours putting down and mixing a track on recording gear, even if recording just by myself. It's much more solitary, much less physical, and progress is much more incremental. I have to think about it a lot more than playing music, where I just lay down tracks one after the other.

And so far, I've done very very few art pieces where at the end, I feel satisfied with it, like I've done a good job and it's obvious, whereas once that song's done and mixed it feels great - even if some of it could be improved in minor ways.

The music was just so much more visceral to me. I don't get that feeling from my art, at least not what I've been doing lately.

I don't really understand why doing art is psychologically so different for me than making music. I need to figure that out, and I feel like I need to figure it out soon.
Posted by Jeff Z at 6:05 PM No comments: