Here's where I'm at on the DW piece: 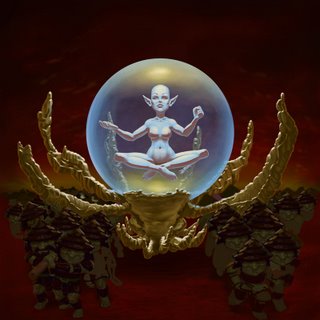 I'm still too damn slow. But it's getting closer. I decided that rather than painting all the gnome faces from scratch, I'd duplicate the one I had and then make changes to the copies. Much faster. I sometimes fail to remember all the sneaky "speed it up" tricks that one can use in digital, and wind up noodling too much.

At this point the gold thing is done, the girl is nearly done, and the gnomes are taking shape. Once I get the gnomes done, the final stuff will go very fast as it's mostly FX.

Update: HOLY CRAP, somehow the news never reached me that I had to do more than just start a thread on CGTalk to actually enter the contest. I was poking around the DW home site and saw that my image was nowhere to be found among the entries... then found some instructions that I had never seen before. I've followed them, uploaded an image and info... hopefully it will get set up properly.

Whew, I'm sure glad I saw that. Woulda really sucked to do all that work and have it not count.
Posted by Jeff Z at 2:52 PM