At the Bloodfire booth, Wacom lent Lee a Cintiq 20 tablet monitor, which I got to spend some quality time playing with, resulting in this Star Trek type ship painting: 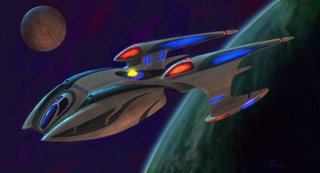 The Cintiq is really cool but it took some getting used to for me. Lee had it plugged into his laptop which didn't quite have enough video card power to run the Cintiq properly, so the image didn't fill the entire screen and there was some lag in the pen response, which slowed me down a bit but not too badly. The other problem I had is that I am constantly using keyboard shortcuts and custom-programmed Actions on the keyboard function keys, and the way Lee had his laptop set up it was difficult to reach the keyboard to do some common things. The Cintiq's programmable buttons and touch strips help somewhat but there really aren't enough of them to put everything I need to get at fast on there. I'm sure there's a way to adjust to it with better keyboard placement and probably keeping the Actions palette open with my common tasks all programmed, so I can run them by double-clicking on them

Even with those limitations I think a Cintiq would be a good thing to have, so I'll have to budget for one next year. Can't afford it this year, sigh.
Posted by Jeff Z at 11:28 AM

I've been dreaming of owning a Cintiq myself some day but all I've got is a laptop. Your feedback on the Cintiq's performance issues on the laptop is interesting.

Keep up the great work!