Here's the next bit of concept work for the Steampunk Challenge. We have our Tortoise, so here's the Hare:

I actually did another version of this first, a more "iron" mechanical clanking monstrosity: 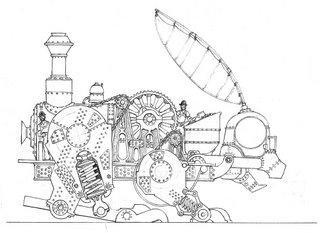 ...but TGF pointed out that it didn't really look much like a hare. I realized at that point that I'd gotten a bit lost in the mechanical details and thoughts of "how would it work" rather than "what will look right for my image," so I stopped and did the second version, which I like much better.

I'm sure I went a bit overboard on the details of the second one, but these drawings are just to get the visualization of what the thing might look like in my head. I'll keep the large shapes, but I'll cherry-pick the details in the final image to make it look balanced and consistent.

Next up, layout for the final painting.
Posted by Jeff Z at 2:27 PM

I love that final one you came up with. The beauty and machinery work quite well with each other.

These are gorgeous! I agree, I think the second design is much more elegant.

Those are bad ass!

I dig how even the text reflects their personalities. While the Hare is "champion" the Tortoise is "ingenious."