I've been working on this most of the day and though there's visible progress, I feel like I'm going nowhere. Pretty sure now that I won't have this thing to a point where it will be competitive in the Challenge by the deadline on Monday. I'll still turn in what's done, of course, but I'll still have a lot to do to finish it. Well, here's where I am: 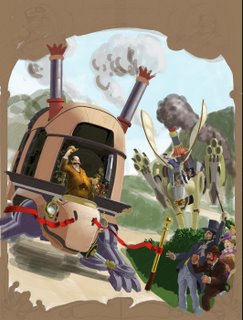 I've started taking screen grabs at various points to show progress in more detail. In this one, I laid down some lines to show me the sun angle: 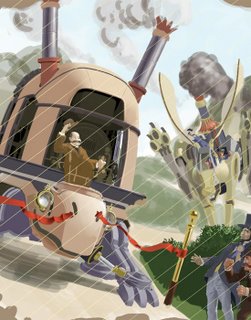 Made them on a separate layer in Screen mode, then turned the opacity way down so they're just barely visible. Then I started working on some details in the Tortoise and Arlo: 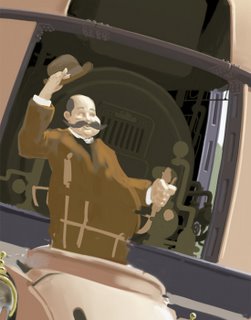 He's a cheery, florid fellow, basking in the glory of his underdog upset win:

More details on machinery and clothing: 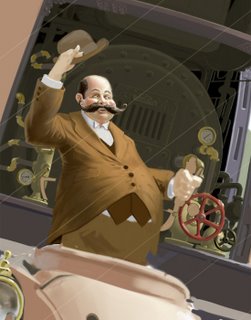 Here he's pretty close to finished, tho there were more tweaks before I grabbed the top image: 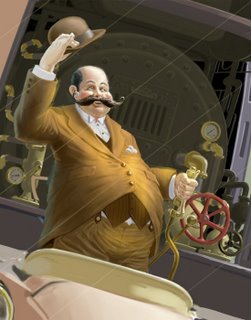 Then I moved on to some work on the Hare, let's not leave out our villain Commodore Rasmussen: 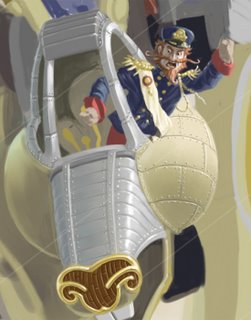 I like how the image is going and I think it will work pretty well when it's finished. Usually about now I'm really hating the painting, but right now I think it's okay and even though it's a lot of work it will be worth it.
Posted by Jeff Z at 1:06 AM