I got quite a lot done today: 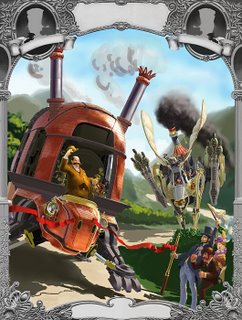 ... but it's still not really anywhere near "done," there are still some basic things that aren't completed like the full bodies of the crowd lower right, the Tortoise smoke trails, and many of the smaller (but less important) parts of the Tortoise that just aren't there at all.

Some of the things I want to put in probably aren't necessary to have it complete enough for the contest, and I can leave them out. However, I hear that the contest upload server is straining and that there's a day-long queue to even get a final image sent in, so at this point I have to assume that even if I can "finish" enough tomorrow, I won't get the image in by the deadline.

While that's a drag, I knew it was a significant possibility when I started work on the image. The contest began on Nov. 10, which was right when we started moving into our new apartment - a long drawn-out process. I didn't even start the first idea drawings until a month after that, and wasn't able to seriously start painting until after the new year. Had I not been dealing with the move and everything else, I would have been painting by Nov. 15 or 16 instead of Jan. 10!

So, if I don't make it, it's okay. Have no fear that I will still finish this image all the way out. It's the first piece I've done in a long time that I'm looking at and thinking, "hey, I really like this, it makes me happy!" I think it's going to get some attention regardless of how it fares in the contest.