I've put in some time on the people in the lower right: 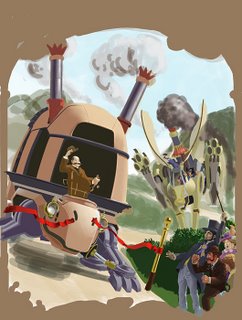 Here's an enlarged version so you can see it better: 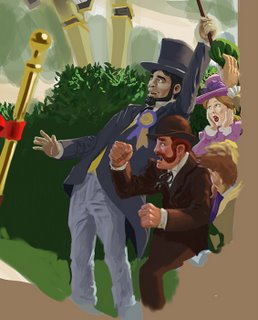 I never used to have fun trying to paint realistic-ish people, because it's hard. But after doing something like 65 of them for the Sopranos video game, it's a whole lot easier. These were fun to do, coming up with some little story in my head for each one.

Unfortunately, with them painted in I can see that they're too large for where they're standing, so I will either scale them down or I'll scale up the Tortoise. Not sure which yet, still have a bit of time to figure that out.

Not that my non-artistic opinion matters much but... I'd scale the people down. My reasoning is that the tortoise already takes up a large chunk of the viewing area, and making it any larger would block out more of the road, which I think would make it difficult to follow. Just my two cents. Good work, I like the people!