I came up with this idea about a year ago but never rendered it; it popped into my head last night so I decided to draw it. I couldn't find the rough sketches so I had to do it from memory: 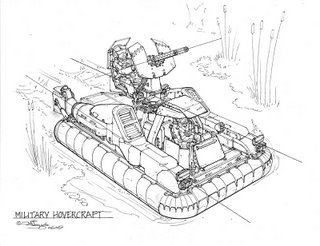 I like this better than the first sketch ideas that I remember, actually. This vehicle is kind of like a hovercraft version of a jeep or HUMMV with a machine-gun mount (reminiscent of Halo's Warthog, to be sure, heh), but not a sci-fi vehicle, it's something that probably could be built with existing tech. It's powered by turbines (jet engines) like the M-1 Abrams tank, using the jet power to both move the vehicle and inflate the air cushion. The weapon mount is two Browning .50-cal on a motorized rotating mount for 360-degree field of fire. It could carry a jeep-like cargo load or 4, maybe 5 fully-equipped troops on the rear flatbed.

The US Navy has a very large version of this sort of thing, the LCAC, for landing Marines on the beach. They're pretty impressive if you ever see one, much larger than you'd expect. There's an LCAC squadron hangar on the way to San Diego, right by the I-5.

Marker-rendered version to follow soon. Also, I had an idea for a 4-wheeled armed rough-terrain vehicle at about the same time, which I actually partly built in 3D, which will be the next design project.
Posted by Jeff Z at 12:07 PM