I've been doodling on paper when I can, thought I'd share some with you. Here's some random spaceships and image frames: 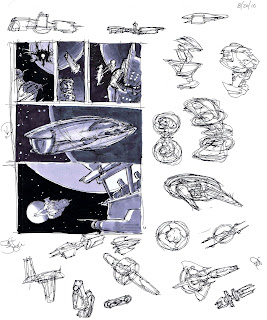 Playing with a book-cover-ish layout, plus more random: 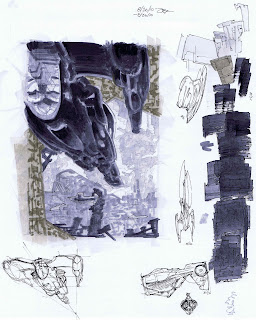 A couple of pages of Ringworld Flycycle designs: 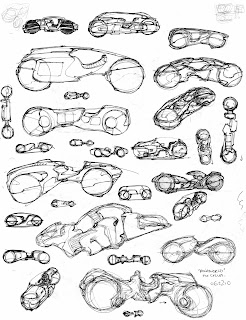 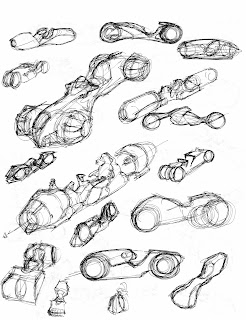 And finally yet another page of random spaceships (I have thousands of these): 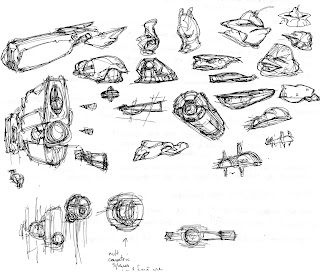 What Happens When I Fail 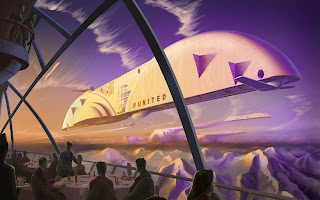 I'm a bit apprehensive about posting this, but here goes: a tale of artistic failure.

To be fair to myself, this happened in the context of my wife and I preparing for our baby's birth, the actual birth itself, and on top of all that, doing a lot of freelance work. I simply could not put in the kind of time I spent doing, say, my Steampunk Tortoise and Hare.

I'm not really broken up about failing this way under those circumstances - clearly, I had more important concerns! - but still, it's useful for an artist to confront a failure and figure out what happened.

So earlier this year, CGSociety (of which I'm a member) posted the annual InVidia NVArt contest. This year's theme was "Syd Mead: Accelerate" - with the challenge to create an illustration of some kind of vehicle or transportation system in the design style of the legendary illustrator. Now, I'm a huge Syd Mead fan, he's been a major influence on me in many ways, so to me this is seriously exciting. Even better, the contest is being judged by not only Syd Mead himself, but some other people whom I admire, including BoingBoing's Mark Frauenfelder, Lorne Lanning of Oddworld fame, and none other than the mighty Mythbusters, Adam Savage and Jamie Hyneman.

I am all over this contest. I am going to go nuts on it and do a really amazing piece. At least, that's what I thought at first.

So I start sketching. I had two possible ideas in mind: giant stratospheric airships and a "bus train" for  the streets of Los Angeles. Here's some of the sketches of the dirigible (I never got to develop the bus idea) (click to enlarge, as always): 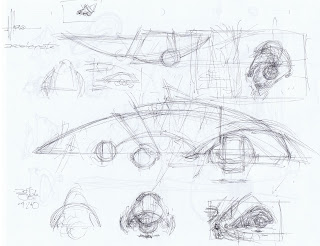 For the giant dirigibles, I was trying to grok Mead's shape language. He uses pure arc curves (parts of circles) rather than accelerated curves like you see on modern cars or aircraft, and tends to juxtapose more linear and geometric "graphical" cuts and surface features. 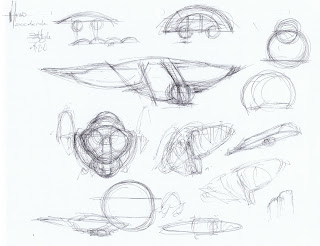 There's a kind of "revolving carousel" thing here that cylindrical passenger and cargo pods get loaded onto, and then rotated upwards into the body of the airship. Some of the ideas have more than one carousel. The rest of it is a truly gargantuan helium gasbag containment system, with a rigid frame made of 3rd-generation composite materials. 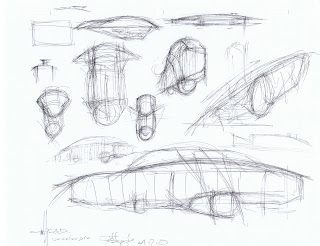 However, another attribute of Mead's work is that for "real world" items that he's designing, he doesn't go too far off into "fantasy-land," the overall design of the object tends to be fairly prosaic in many ways. This is most evident on his yacht designs, where the shape of the vessel isn't a radical departure from existing vehicles. Some of his cars are pretty wild, but the ones you can actually build with today's tech look like todays cars, for the most part. 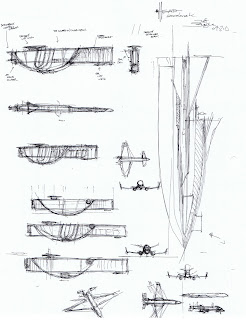 The first sketches I thought were a little too much in fantasy or scifi land; I felt that maybe I should tone back the design to something that looked more, well, logical in some way, something that we could build in 20 years or so. So I started working toward that.


You can see on some of these that I did sketch copies of some of Mead's designs, trying to keep them in mind as I tried various looks. Also, you can see I'm starting my composition ideas for the illustration. 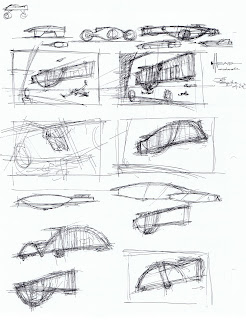 In hindsight, I think going for a more real-world look was a mistake. Who knows what a stratospheric dirigible made of super-lightweight composites and fabrics would look like? Especially since my thought on their function was that they would use the world-girdling Jet Stream winds as their primary motive power. The whole point of these would be to use far less fuel to fly people all over the world; jet fuel is getting very expensive and it doesn't look like it's going to get cheaper. At some point it will be uneconomical to burn it. 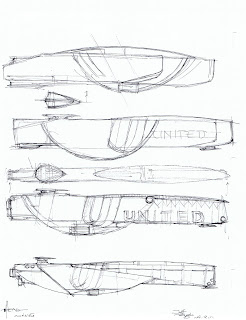 To solve that potential problem, these huge airships would float along at 35,000 feet using almost no fuel at all, while specially designed planes would bring passenger and cargo modules up to them, and take them back down to local airports when the airships flew close to their destinations. So it's a crazy, exotic sci-fi solution to a problem that would most likely be better solved by trains, but hey, that's the fun of it. 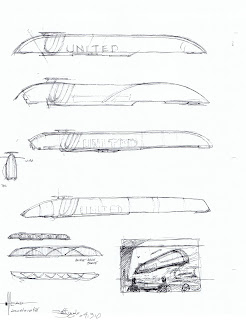 So finally I settled on this last shape. Again in hindsight, this is not a very interesting shape - but then, a Zeppelin isn't all that interesting in shape either. It's just a big cigar shape with some fins. A Zeppelin's most interesting attribute is its sheer size - and my airship would be something like 50 times the size of the Hindenburg in order to have enough useful lift to carry the equivalent of 20 757s worth of containers.
Still though, this is an illustration for a design contest, not a product pitch to Boeing. Yes, a real one of these would probably have a very simple overall shape, but that doesn't make for an exciting piece of art. Thus, right from the start I'm making a mistake - really, a crucial mistake. 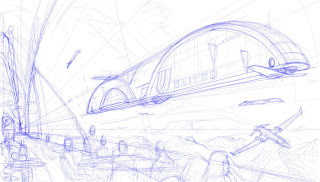 The pencil layout is pretty straightforward. I like the composition in general; I'm showing a view of one of these behemoths from inside the dining lounge of one flying nearby, and everything's got a nice angled rake back to the vanishing point, which is inside the image - another thing Mead does very often. There's a "scenario" happening, with people in shot enjoying dinner and the spectacular view, another Mead staple. It puts the viewer into the picture in a comfortable way. 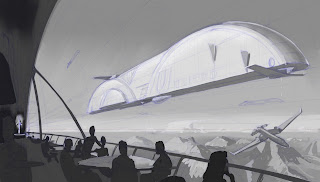 On the value pass, I'm going for a dark frame in front to really set off the bright airship that has the sun shining on it. Pretty standard stuff. 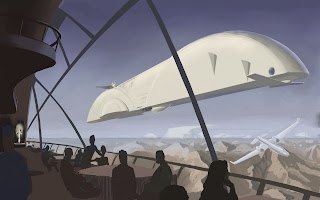 On the first color pass, I start feeling like this is going south on me. This is a really drab color palette, but I didn't notice that right away, at least not consciously. 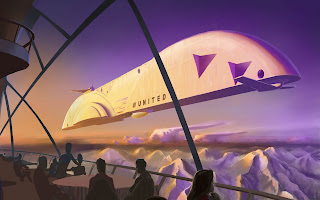 I got all the way to this point of detailing before my wife happened to see the piece, and pointed out that the image just looked really drab and lifeless. I decided to color it up by putting it in a "golden hour" sunset color scheme, which took several hours of trial and error with Photoshop layers and some significant changes to the shadows. This helps, but still... the subject shape is unexciting. Even the most vibrant colors won't hide that.

Still, I struggled on, trying to pull something good out of it. This is as far as I got before the deadline; it's very unfinished in terms of all the details. However, even if I finished them all and things were very polished, the extra detailing would not really help much. The ship isn't an eye-catching design, and now it's clear that the view angle is also not very exciting, either. There are a number of problems with believability in the details, like the window supports and the mountains. The high cirrus clouds are just super-quick sketches with no finish, so they look pretty poor; also, they kind of lead the eye out of the top of the image never to return, which is a big no-no. Details like that could be fixed with time, certainly, but I ran out.
Though I did submit it to the contest, this is just plain not worthy of it or of myself. I can do far better. I feel bad that this is what Syd, Adam, Jamie, Lorne and Mark saw of my work. In that context I probably shouldn't have bothered putting it in, but I felt the need to show that at least I tried. (I take some solace in knowing that Adam and Mark at least have seen some of my better stuff like the Wheaton/Scalzi/UnicornPegasusKitten painting - which, by the way, I also executed during this same 3-month period. So, my priorities were in the right order.)
So that you can see what I was up against, and why I'm calling this a major fail, here are the winners of the contest. Even the Honorable Mentions are way beyond what I've done here, far more Syd Mead-ian. I must admit I was pretty crestfallen when I looked through the entries right after I submitted mine.
Now again, this contest happened during the final 3 months of my wife's pregnancy. The deadline was a few days after the baby's due date, so I'd figured I'd spend the first 3 weeks of May finishing up and polishing the painting. However, he was born 3 weeks "early" (though still full term and perfectly healthy!), so that just didn't happen. I put maybe 20 hours total into this, when I'd planned on more like 100. So really, given all that, I'm amazed I got even this far.
We certainly didn't fail with the baby. He's the best creation I've worked on so far, and probably will ever work on. I don't really mind blowing a contest entry because he came along. :)
What have I learned from this? Design, design, design is crucial. Never forget the purpose of the final piece, as that tells you what your design needs to encompass. I lost sight of that and this is the result; a really cool design rendered sketchily would have been far better than this fairly well-rendered bad design - and in fact, the 5th place winner was just that, a fairly loose, painterly illustration of an unusual,  interesting and deceptively simple design idea.
Next time, I'll be sure to put way more time into designing my subject matter, and I won't stress about trying to nail a super-slick final piece.
Also, never plan a project around on a baby's due date. Most babies are not born on the date the doctors will tell you they'll arrive!
I hope you've found this enlightening. Comments are most welcome.
Posted by Jeff Z at 12:33 AM 2 comments: