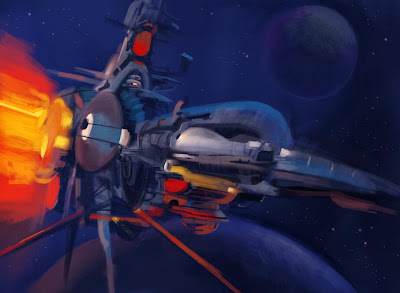 Hi to all the space nuts from @NASASocial! It was really great to meet everyone and hang out at JPL with real life rocket scientists.

Here's a spaceship painting I did earlier this year in Procreate on my old iPad. It's a rough "master copy" of a painting by the incredible John Berkey that appears on page 44/45 of his collection Painted Space.  I was trying out Procreate while also trying to get a feel for Berkey's style and interesting, exciting color palette.

I just got a brand new iPad Air, which will let me work at much higher res than this image, and tomorrow my new Wacom Creative Stylus arrives. I'm hoping the new stylus lets me do production-level work on the iPad.

Hi! Been a while, huh? Well, I got a new job doing concept art at Blind Squirrel Games, so I've been a little busy, but hey, only about 2 months since last update, so I'm 67% faster! (Riiiiiiight.)

Had some time to work on my own stuff, so here's an update. After leaving it for a while, when I opened the image the first thing that hit me was that the parked fighters were looking odd and flat. So, reworked 'em:

Here's a detail of the left one before:

Here's after. Quite an improvement!

Gotta add shadows under it, but it's looking way better than the sketch.

Because it's all about being a better painter, this is all just straight paint. I think I've unlocked the key to making my brain paint without freaking out (besides not using the word "paint"), which is to use only a 100% opacity brush almost all the time. Just lay in flat tone or color, and to detail uprez, zoom in, and use a smaller brush. Seems to be working, because I'm having fun.

More to come sooner than later!

I get some time to work on my own stuff for a change! This one started as the tiny sketch on the upper left of the image below, about 1x3 inches. As I was scribble-sketching the idea for a wedding procession popped into my head so I kept with that theme and did a few more little sketches... 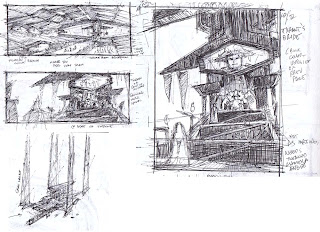 There's a closer view of the throne in both wide (film) and tall (book cover) versions, and then a little scribble of the giant sky fortress where the wedding is being held, in its docking bay. Next I scanned in the tiny sketch and placed it in an Illustrator file, scaled up to 11x17, where I did a pretty rigorous perspective layout.

I'd meant to do more of the line work in Illustrator, but it was just taking too long, so I printed it out on 11x17 paper and hand-sketched the rest of it. Still feels better to use the pen - and it's far faster.

Then I scanned the drawing back in, brought it into Photoshop, and started laying in the values:

And now I'm defining values in more detail and slowly painting out the line art, which I copied and flattened down onto the background at about 40% opacity (top image). I'm keeping my layer count small and so far doing all the painting on the Background layer. The background sky is a placeholder made from a photo, I'll paint over it to shape the clouds in a graphic arrangement that works better with the foreground elements. I have a pretty solid idea for color palette, but I'll be adding that very late in the process.